We love to share our case studies as with each individual treatment plan, we learn more and more about animals and how they behave.

It is from this continual, ongoing learning that our highly skilled staff are able to assist many other pet families overcome behavioural issues affecting their pet’s ability to live a happy and confident life.

Get in touch with our GVC Pet Behaviour and Training team at our purpose-built facility in Khalifa City, Abu Dhabi to see how we can assist. Email behaviour@germanvet.ae or fill in the online form. 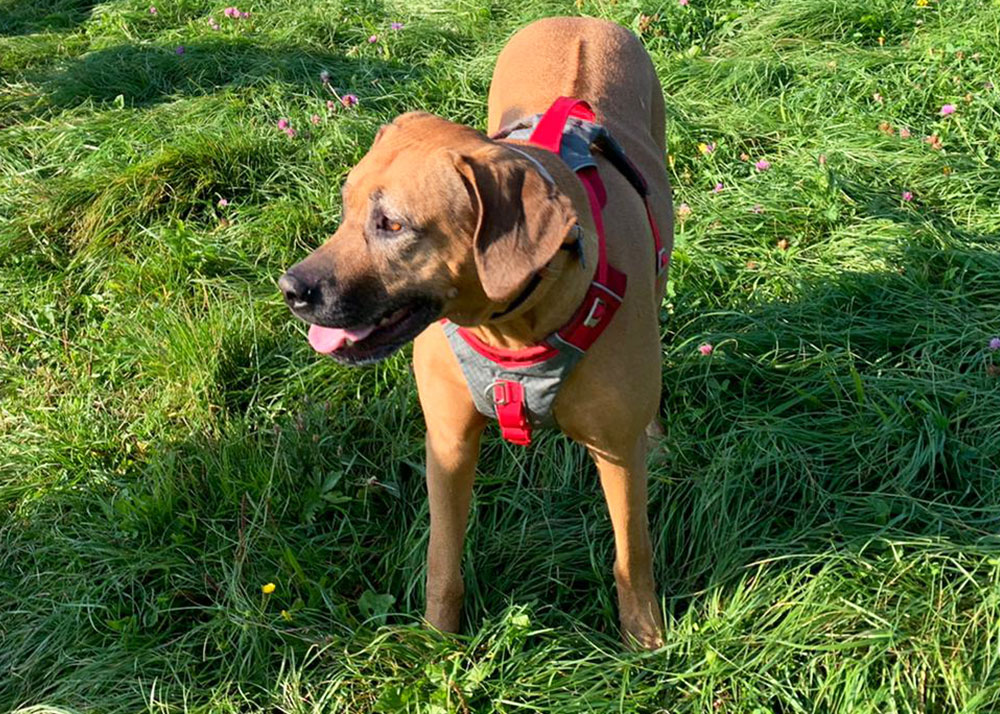 George is a beautiful Rhodesian Ridgeback and despite his size (nearly 60kg), he used to be very anxious and worried about the world… so much so that he was not able to leave the security of the car on his initial visit.

Fast forward 12 months after presenting to our GVC Behaviour and Training Clinic in Abu Dhabi, and George has come on in huge leaps and bounds.

Before coming to us, George’s owners noticed the four-year-old was excessively anxious in many situations. He showed specific fear-related behaviours, especially when unfamiliar people and visitors entered the home and when he encountered other dogs on walks, all of whom he would growl and bark at.

The trigger which prompted an appointment with us is when a visitor received a bite to the leg.

Now George’s anxiety is greatly reduced and he is even able to enjoy the social company of other dogs again, something that he found very difficult previously.

We even saw physical evidence of George’s improved mental health – his skin rash disappeared and his coat is thicker, healthier and shinier!

How did we help George become a happier, healthier, more confident version of himself?

We started with his initial two-hour consultation performed in the security of the family car outside the German Veterinary Clinic, where he felt most comfortable, and we were able to carry out his initial assessment of both his behavioural history as well his current behaviour and body language signs.

It became apparent very quickly just how anxious George was and how it was affecting many aspects of his life as well as his physical health. George was becoming more and more difficult to manage and his behaviours were becoming dangerous to others.

Together with George’s family, we created a multi-modal and individualised treatment plan for him, ensuring that everyone felt comfortable with and able to execute the plan.

Two months after our initial consultation, George came back for a follow up appointment and happily jumped out of the car and entered the consultation room.

George’s family reported a significant improvement in George’s behaviour with George being much calmer, sleeping and resting more and wagging his tail and playing again, something which he had not done in a long time.

The management tools that we gave George’s family enabled them to prevent further incidents of aggressive behaviours and his physical health had also improved significantly. Also with the help of our amazing Positive Reinforcement Trainer, George is now able to enjoy walks and the outdoor lifestyle without feeling anxious or threatened by other dogs!

George’s case is not uncommon and we are glad we were able to assist him and his family.